Kevin David Net Worth: From Broke to Successful in 90 Days?

Some entrepreneurs like to play it close to the chest.

They don’t want people to know what their net worth is. They want to keep people guessing. They want results (and customers) to speak for themselves.

Kevin David may be one of those entrepreneurs.

I want to be clear: This is not a Kevin David review. I won’t be going in-depth with a review of all his training courses and programs. I’m just going to lay out the various online businesses he’s used over the past decade to build a reliable, solid set of income streams.

Many of his strategies aren’t new — having a massive YouTube channel or keeping one leg in the affiliate marketing niche are strategies that many people use to build a sustainable and profitable business.

Instead, I’m going to focus on a handful of salient and significant takeaways that you can use to build your own online business empire, including:

Who is Kevin David?

If you’ve never heard about this guy, you’re not alone. His followers on Instagram today number about 300,000, but the numbers of his YouTube subscribers are much higher. Currently, he has over 1 million people (well, 1.18 million people, to be exact) following his content.

Hop on over and you’ll see what he’s built his expertise around (and gain a few hints on how he’s created his high net worth):

I want to draw your attention to the “Playlists” section of his channel, however. There are videos here that are essentially free marketing for a massive chunk of his net worth (and one of his income streams): 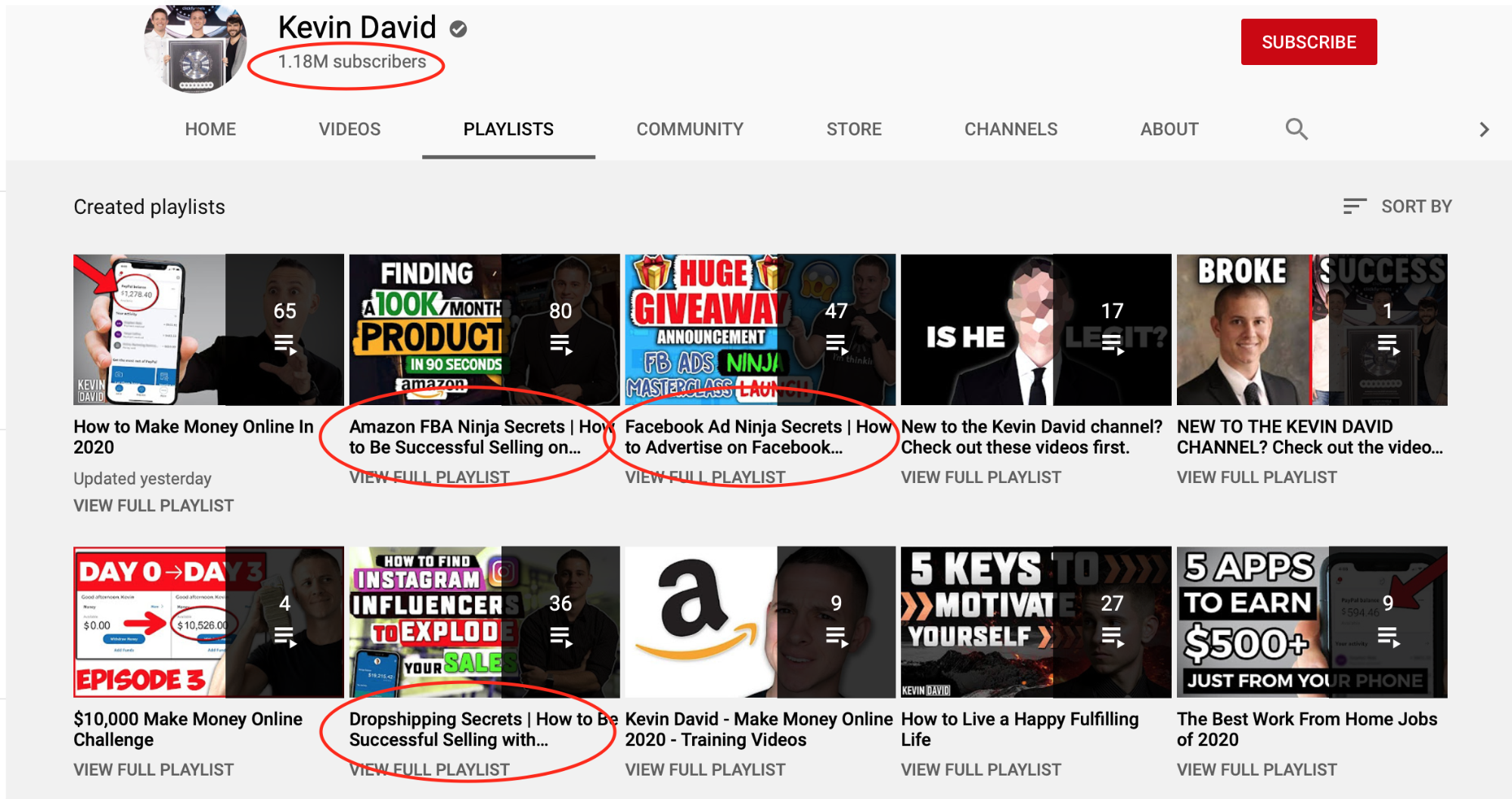 I’ll give you an inside look into these revenue streams later in this Kevin David net worth review. For now, you should learn about the fateful decision that led Kevin David on a journey from employee to earning millions as “thatlifestyleninja.”

Hint: The smartest thing he did was stop allowing someone else to direct his day. Instead, he created his own dream job, step by step.

With the total of his established income sources, Kevin David’s net worth is between $10 million to $20 million in 2021. He’s not really marketing his courses very aggressively right now, so there’s no doubt that his net worth could actually increase in the next year.

In fact, to cut his marketing costs, Kevin is using content marketing tools like YouTube to build relationships with his community. That’s a really smart strategy if you plan to be in the online entrepreneurship space for the foreseeable future.

How Does Kevin David Make His Money?

Before Kevin David ever stepped into the Amazon affiliate and Shopify dropshipping game, Kevin was a humble accountant who had just graduated from Oregon State.

Like Gary Vee, this guy tapped into every business opportunity he could find (like baseball cards and candy bars). And, like Russell Brunson, he got good at selling by actually building products that others wanted (like gaming apps) and studying the art of monetization.

After kicking the accounting gig to the curb, Kevin landed his best opportunity with Facebook as a Privacy Consultant. Employee perks at the HQ in Menlo Park came with the gig. Even though he quickly got bored, working for Facebook turned out to be a stroke of luck for two reasons:

The rest, as they say, was history.

Well, actually, the rest was funneling $1,000 per week in a private label product after the first 30 days, which then translated to almost $2.1 million in profit during his first years.

So if you’re wondering, “Is Kevin David a scam?” this amount of money should tell you that his story is entirely true. However, it didn’t happen overnight. And even though Kevin likes to package his rise in a “From Broke to Successful in 90 Days,” you should take that tagline with a grain of salt.

Success means different things at different stages. So, yes, he did change his life in just 90 days (he began making $50,000/month). But he didn’t make $2.1 million in 90 days with no groundwork. That kind of wealth takes time.

Wait, What is Amazon FBA?

I’m going to make this really simple for you:

Amazon FBA is when “you sell it, Amazon ships it.” That’s it.

It’s a model of doing business online that’s based on dropshipping:

Sure, they charge you for the service. But the income you earn feels pretty passive for the amount of work you put in. The trick, however, is finding the right product — one poised to sell and even blow up. Kevin focused on Amazon FBA before moving on to other forms of making money online.

Making the Most of Affiliate Marketing

Another really lucrative, if time-consuming, way to do business online is through affiliate marketing. Kevin, like so many others, has built a few websites geared around a niche topic. But, if you really plan to make money with this method, you’ll need to have a good working knowledge of:

Affiliate marketing essentially consists of making recommendations for products and services to a user. If and when they click the link and make a purchase, you get a small commission for the effort. It adds up but it takes at least 12 to 18 months to gain traction.

There are many people who are tempted to set up general stores for an e-commerce business. But, in my opinion, you should choose a niche. You don’t need to limit yourself to just one product.

But ask yourself this: Would you rather have three to four Shopify stores, each bringing in $20k, or a general store that banks $30k one month and $10k the next?

The fact is that general stores equal unstable conversion rates and profits because you’re not the “go-to” for one particular product or product category in your customer’s mind. And, because of that, it’s harder to create a sense of loyalty in a potential customer.

We’ll go over Kevin David’s digital training courses on Facebook, Amazon, Shopify, and the rest in just a moment.

For now, you should know that online digital courses are a proven way to do two things:

Digital course sales is a lucrative industry that is set to reach $325 billion by 2025. So is there any reason why you shouldn’t earn a slice of that whopper?

Okay, I’m going to point out this strategy because I think it’s both smart and passive. You don’t need to be salesy and you can still count on income every day.

It’s a kind of affiliate marketing strategy — but it works with YouTube videos.

Yes, you can make money from AdSense — Shelby Church, for example, is a popular “lifestyle” vlogger that pretty much makes videos about her life and pulls in $120,000 from YouTube’s AdSense program. She got paid $7,000 for just one video. But, for this strategy, you’ve got to have high watch times and an even greater number of subscribers.

But entrepreneur Kevin David’s strategy is smarter. Sure, the guy has enough subscribers now to make $400,000 off of AdSense. But he insulates himself against the instability of YouTube AdSense by including links to:

And that’s not even the best part.

The best part is that this money comes in on autopilot. He doesn’t spend any time shipping, fulfilling orders, processing returns, or dealing with customer service.

You can see how this adds up, right? Suddenly, Kevin’s net worth is starting to make sense.

The heart and soul of Kevin’s business model is courses. Which means that the bulk of his net worth, at least in the initial stages of his online business building, depended on courses.

However, Kevin David courses are based on his own experience and mastery of the concepts.

For example, you won’t find him creating courses on financial investing (though he could definitely create one on accounting thanks to his major at Oregon State Honors College). But he could create a course on mastering YouTube because he’s done so well on the platform.

Like the name suggests, the Shopify Ninja Masterclass is a course on dropshipping businesses. What he teaches inside the course focuses on how to skip the months and months of testing, and failures, and helps you get right to the strategies that have worked for him.

Because Kevin David is a ClickFunnels expert himself (winner of the coveted Two Comma Club X Award, given to entrepreneurs who make $10 million using a sales funnel), he knows the importance of traffic.

Now, you may already know from reading Brunson’s Traffic Secrets lessons that generating traffic is one of the most important aspects of online sales. Without it, even a great product will struggle to gain traction. Kevin’s Facebook Ads Ninja Masterclass Course gives learners a crucial piece of the puzzle.

Next up is the Amazon FBA Ninja Masterclass course. While there are plenty of people who have transformed themselves into Google Ads experts, Amazon FBA continues to confound quite a few people.

It’s probably because true success using Amazon’s FBA methods requires a lot of upfront research. You need to check out your competitors and do product research. It’s the product research that is a big pain point, so many people have benefitted from this course.

Does this look familiar to you? 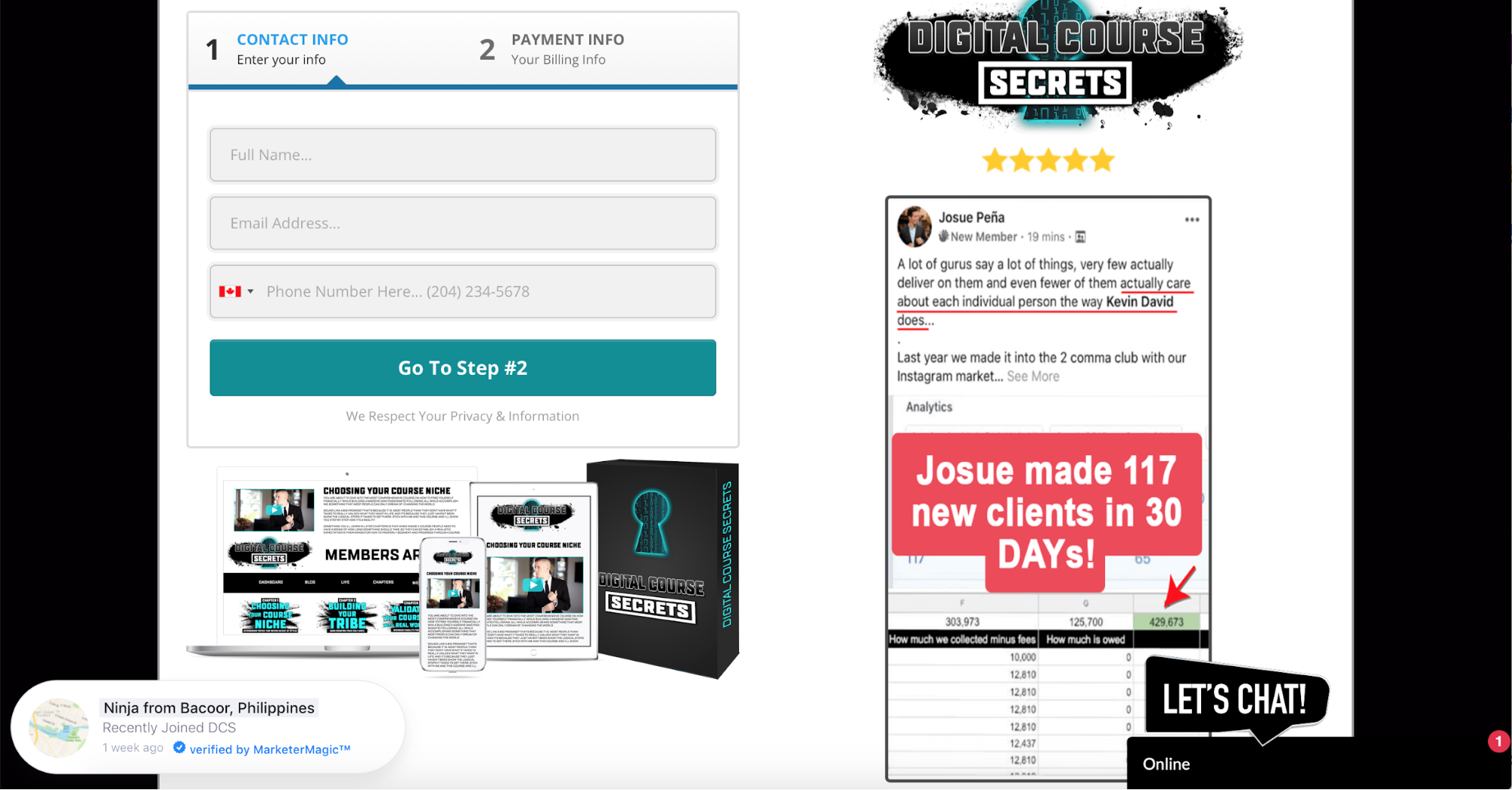 This is the exact template for checkout that you see on many of the ClickFunnels checkout sites. That makes sense since Kevin has clearly mastered ClickFunnels.

Each of these courses cost almost $2,000, so you can expect a ton of information packed in.

At just $10 bucks a pop, the “Ultimate ClickFunnels Masterclass Course” is a crash course on how to navigate around the software. Now, it’s not as in-depth as any of Russell’s courses (like the Funnel Builder Secrets course), but those who like Kevin’s teaching style get a lot from this course.

Final Thoughts:
Use the Kevin David Model For Yourself

To build net worth like Kevin, you don’t need to follow exactly what Kevin did. Russell Brunson, for example, built his wealth and net worth in a totally different way to Kevin. And Dean Graziosi, who’s only now expanding into the online space, spent years making money from good ol’ fashion real estate.

Don’t try to mimic their path exactly. Instead, ask yourself what you’re already good at and go from there. Be curious about emerging social media platforms, and do your best to “get there first.” Build slowly, steadily, and spin multiple plates at a time by first getting just one spinning.

Then hit me back in five years because, kid, you’re going to make it big if you follow this formula.