Russell Brunson Net Worth: The Man Behind the Machine

At this point, almost everyone who dreams of making money online has heard the following famous intro:

“Hey everyone, what’s up, this is Russell Brunson here!”

This self-made multi-millionaire has been introducing himself this way since before he “hit the jackpot.” Or, rather, made the jackpot happen.

Can I be real with you for a minute?

In Russell’s case, these clues are everywhere. He practically gives them away, continuously, and as an essential part of his story.

This is one rags-to-riches saga that depends on you, the audience, to buy in. It encourages people to mimic precisely the same moves he’s made. And it celebrates your wins when you get the same positive results.

In other words, Russell’s fortune and his success are entirely within your reach.

And check this out:

You don’t need to take cold-water showers and nootropics to earn it.

Read on, and I’ll show you:

Who is Russell Brunson?

You may already know that Russell Brunson as the CEO of ClickFunnels. Or you may just know him as “that marketing guy.”

These days, people know Brunson as the founder of a SaaS company that built a 360 million dollar revenue software as a service without outside funding — and that was in 2017.

Can you imagine how much that figure has grown since 2017?

As an internet entrepreneur, the opportunity for Russell Brunson to grow his net worth is practically limitless. The only variable that determines where the ceiling goes comes down to time and hard work.

And those are the two variables that you’ll need if you plan to “hack” Russell Brunson’s net worth.

Before he was a multi-millionaire (and I’ll share with you the exact figure of Brunson’s net worth), Russell was a college student at Brigham Young University and Boise State University.

But he devoted any extra time he had to study direct response marketing.

Which led the Utah-native to make his first million in sales from the most random, bizarre, and yet lucrative offer you’ve ever heard of:

A DVD copy of how to build potato guns. 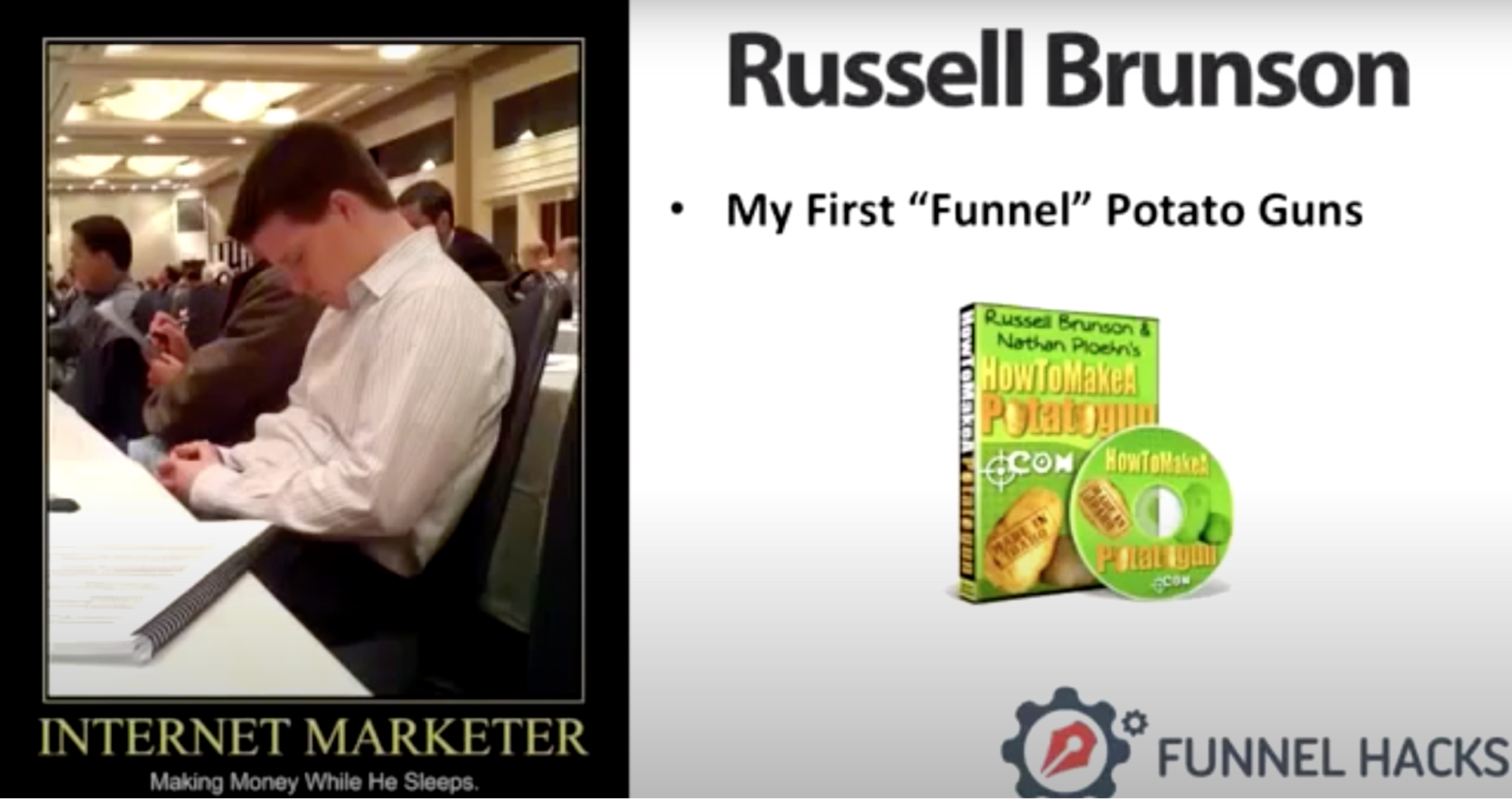 Yep, you read that right: a potato gun guide.

When Russell Brunson was born in 1980 in Provo, Utah, no one could have predicted that he would one day make 3 million dollars in 90 minutes at the 10x Growth Conference by Grant Cardone.

There was some indication that Russell’s natural childhood inclination of competitiveness, curiosity, and determination would result in some fantastic results:

(P.S., This is literally why Russell Brunson packed his years of wins and wisdom in marketing books that capture these techniques, like DotCom Secrets, endorsed by Tony Robbins, Network Marketing Secrets, and more.)

When Russell Brunson set up this business online, it became the blueprint for the power of the sales funnel.

Sales funnels opened up a new wealth of business opportunities — except that there was no easy or automated way to harness funnel building for internet marketing business.

And there was a more pressing problem: Russell Brunson was getting outbid by other companies on traffic for lead generation. He started to lose money as more prominent companies spent more to acquire people.

The solution was right under his nose:

Build a software company that catapults him to one of the top business owners globally and places him at the leading edge of digital marketing.

But it all began as Russell’s humble attempt to simply try and make more money per lead than the average sales journey and not lose money.

Beyond the First Million:
Using ClickFunnels to 10x Profit

When Russell Bruson got together with Todd Dickerson, he harnessed all his sales experience, marketing knowledge, sales techniques, and persuasive sales messages.

This one software revolutionized the internet marketing industry.

As the co-founders of ClickFunnels, Brunson and Dickerson designed, developed, tested, and refined an all-in-one sales funnel builder that would simplify and streamline the way any business:

If you can’t yet see how or why this concept of funnel builders is changing the world, here’s an illustration. 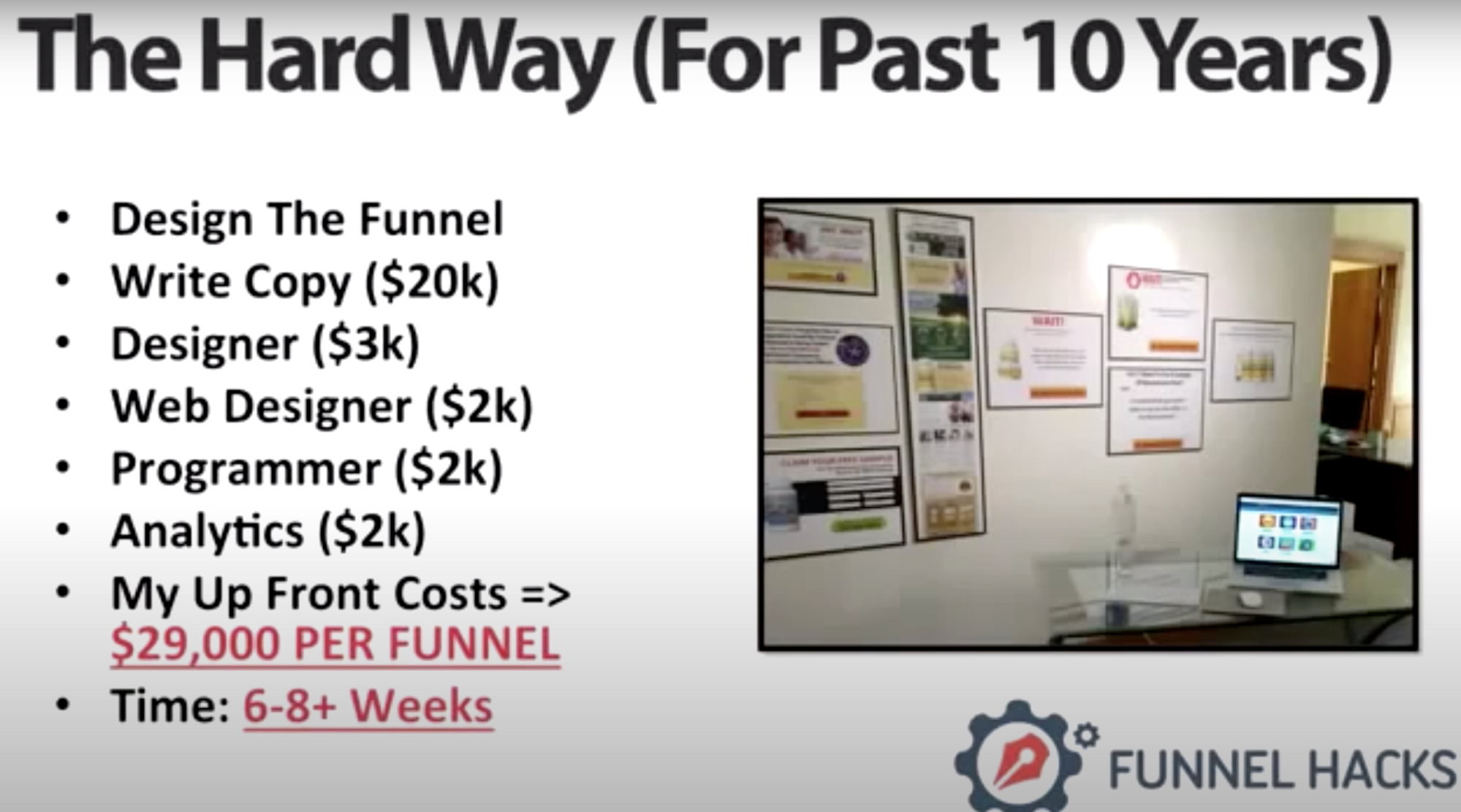 And changed it to this:

Do you see how this simple software could totally transform any business?

At one point, Russell Brunson net worth figure sat at $37 million.

Let me reveal what Russell is worth today (and, by the way, it’s growing!):

See, Brunson is not one of those entrepreneurs who stops at just one thing. Nor is he one of those marketers who gets distracted by a million other shiny objects.

Instead, Russell Brunson gave funnel “hackers” and businesses using funnels everything they would need to make hundreds and thousands of dollars from a few choice offers.

In other words, he narrowed down into funnels but then expanded to include #allthethings:

Whether he envisioned it or not, Brunson also built out an entire ecosystem around the concept of winning with ClickFunnels. His status as a marketing world guru comes from this combination of theory and practice.

Building Multiple Sources of Income for High Net Worth

When you run the numbers on ClickFunnels accounts, it all starts to come together:

The best part is that you add this tidy sum to all the income Russell Brunson ClickFunnels has made in previous years.

And that’s only revenue from subscriptions. If you count up all the revenue ClickFunnels and Brunson pull in from training programs like the Secrets Masterclass or Funnel Builder Secrets, it’s easy to see why the company has grown to $100,000,000.

And, again, we still don’t know what Brunson’s take-home share is from the sale of these programs, but you can easily see how and why his value has skyrocketed the way it has.

The most valuable habit Russell Brunson cultivated early on was to try anything once. He was always willing to whip out his credit card, invest in a competitor’s product, break it open, see what made it special, and try out the same formula. 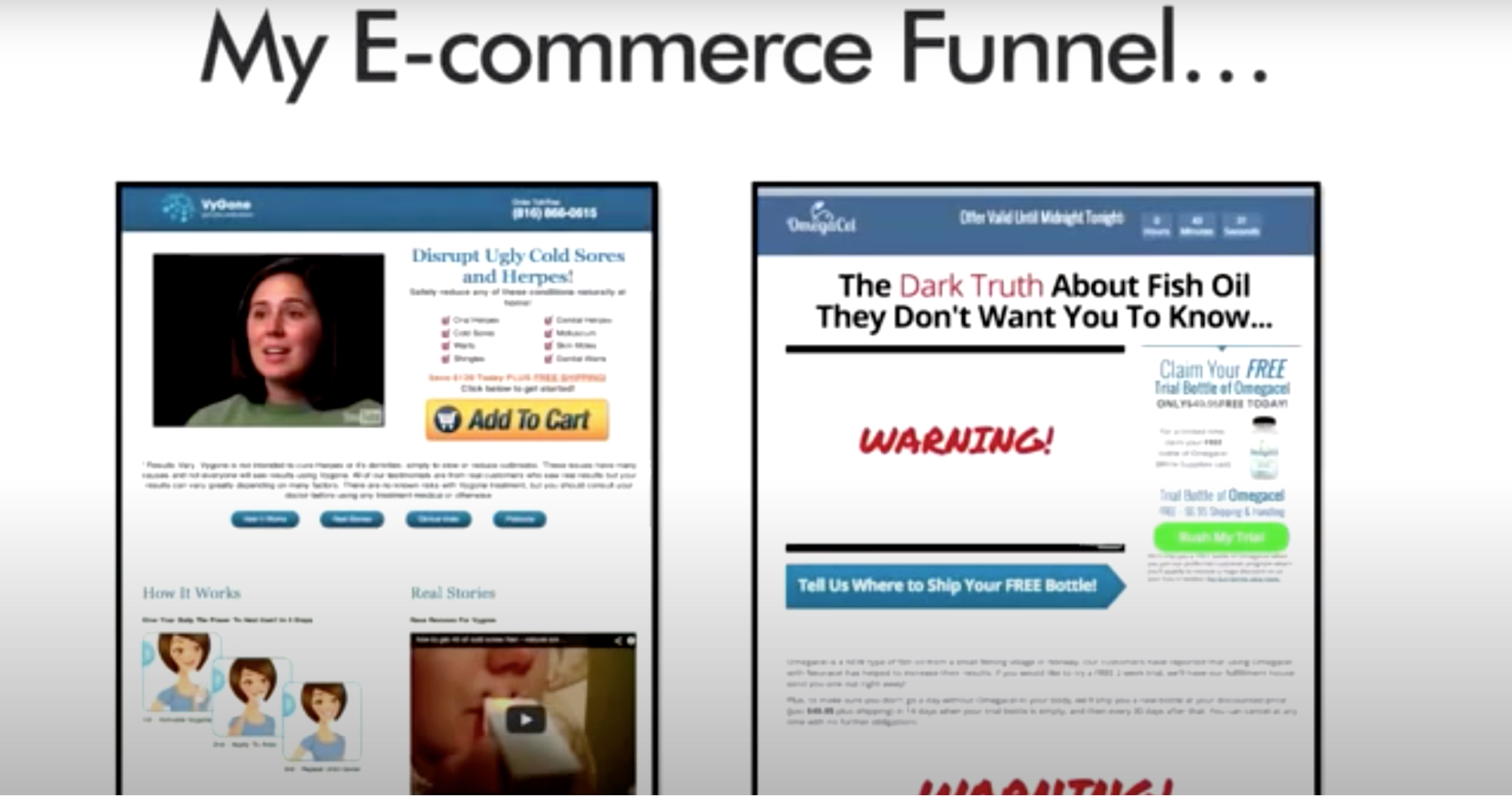 Millionaires are just people willing to invest in their own business, learning, and growth.

So why not take a page out of Russell’s book and reverse-engineer his success in your own online business?

The Books that Built a Brand

The Russell Brunson empire involves a set of almost cult-like ebooks. This fantastic collection of evergreen products empower people to employ leading-edge marketing techniques in literally any form of business.

From coaches to bloggers, e-commerce retailers to consulting services, and even brick-and-mortar service businesses like dentists, the internet marketing space is full of people who have made millions of dollars from books like:

Final Thoughts:
Does It Take Hard Work to Build High Net Worth?

Look, hard work is only useful if you’ve pitched your ladder on the right wall.

What’s the point of working hard if it’s not something you enjoy or you’re inherently good at?

Brunson has managed to build everything in the last five years from scratch. But you have to consider that there’s no such thing as an overnight success.

If you think about it, Brunson started long ago, in the years he collected all those direct response ads and studied them to see what made a reasonable offer tick.

The success of Brunson proves many things, but the most significant truth of all is that you’ve got to go all-in on who you are and what’s most profitable.

Think about it: Russell could have been a wrestler. That was something he excelled at too.

Instead, he chose to follow the combination of passion and profit. While being a wrestler has a limit (on time, energy, even money), building a company online has zero limitations.

Now ask yourself: what’s your path to passion and profit?

What is Russell Brunson’s Net Worth?

Even though most people will tell you Russell Brunson is worth $37 million, he’s far surpassed this. Russell’s updated value is $40 million.

Where is ClickFunnels Located?

Does Russell Brunson Have a Wife?

Yes! Brunson married his college sweetheart, Collette, and they have five kids together (so far).

What is Russell Brunson’s Age?

Russell Brunson is 40 years old. That’s pretty young for an internet marketer with a $40 million net worth, isn’t it?

Is Russell Brunson a Follower of LDS?

Brunson is a self-styled Mormon and a follower of the church of Latter-Day Saints. As a member of LDS, religion and scripture play a prominent role in his growth as a businessman and internet marketer. Brunson hosts a podcast called The Book of Mormon Challenge, which is devoted to exploring spirituality and faith in LDS.