The moment I saw Russell Brunson holding up that glossy box set, I knew I had to have it.

It was like looking at the Lord of the Rings Extended Edition on Blu-Ray with the secret bonuses, director’s cut, and easter eggs all through the special footage.

Even if you don’t care much for hardcover copies and the beautiful casing for the books, you’ll definitely love that Russell and the entire ClickFunnels team updated and extended the books by 40%.

Summary: The Secrets Trilogy Box Set includes updated versions of DotCom Secrets, Expert Secrets, Traffic Secrets, and a fourth book, Unlock the Secrets. At a price of $127, this set is worth every dollar.

The “trilogy” is not what you’d expect.

They’ve trimmed the fat, shelved the stuff that wasn’t in demand, and then added another 614-page whopper to the set.

So even though it’s a “trilogy,” of books, there’s actually room for another, even more massive volume — and, believe me, the fourth book packs a punch.

Get the Secrets Trilogy Box Set

What is the Secrets Trilogy Box Set, Anyway?

The Secrets Trilogy Box Set is exactly what it sounds like: It’s a giant kahuna of a product that includes:

How Can Secrets Trilogy Help Your Business?

Ordinarily, trilogies are a gamble.

I would tell you to buy just one book, see if it’s for you, and then maybe grab the others. I would definitely tell you to wait to purchase a box set — because that would be a lot of money, right?

You’re probably not even sure if you need the whole collection.

Except when it comes to information about internet marketing from Russell Brunson.

For years, this guy has been overdelivering on everything — from strategies around funnels, to how to reprogram your mindset and behavior for massive wealth — for his customers and subscribers.

So I can say that anyone going into the series with the hopes of learning how to make money online is going to win. At your fingertips, you have literally everything you need to make that experience profitable and shave years off the journey.

Here’s why the Secrets Trilogy Box set is a smarter overall deal:

What is Inside the Secrets Trilogy Box Set?

Okay, first up is DotCom Secrets. I have an in-depth DotCom Secrets review right here, featuring screenshots of what the books include.

Essentially, this is your ultimate guide to setting up an online business using funnels. It was the very first book Russell ever wrote and launched, so it pretty much underpins everything that the company, ClickFunnels, does.

Next up is the new and improved Expert Secrets. In my Expert Secrets review, I expand on the book’s details. It follows the same “Free plus Shipping” offer as the other books.

For now, you should know that Expert Secrets shows you how to take your expertise and build a personal (and business) brand that makes you money. And no idea is off the table — a hot dog vendor went on to make millions following the exact advice in this book.

And now, the third book in the book trilogy. It’s newly released and combines the best of the original Traffic Secrets course with years of Russell’s own “secrets” and traffic generation strategies. For more, see my Traffic Secrets review.

Traffic Secrets is the one taking its place. It starts off as a primer on traffic techniques, but, by the time you’re done, this third book in the Secrets book trilogy will become your A-Z, partner-in-crime for gaining cheap, high-quality traffic online.

Get the Secrets Trilogy Box Set

The fourth book is a “workbook” — if workbooks were more than 600 pages and if they covered almost every single thing covered in the previous three books.

Make sure to check out my Unlock the Secrets book review to uncover a few detailed tidbits about the content inside.

Right now, there’s only one way to get this workbook: You must buy it as part of the full Unlock the Secrets set.

This might change in the future, as an increasing number of people review and make use of this book. What’s great about this “bonus” book, to me, is that it’s the key to amping up your skills. You get to practice everything you’re learning.

In fact, if you’ve ever taken the OFA Challenge, the Unlock the Secrets workbook will be a familiar format to you. It includes sections from every single book for you to work out, map, plan, and respond to.

How to Buy the Secrets Trilogy Box Set?

You may have heard from another ClickFunnels affiliate that you can only grab this offer as an upsell when you buy Traffic Secrets book. As usual, everything comes with free shipping.

Now, it’s true — if you buy these books as a set through Traffic Secrets, you’ll get all four for $97.

After the Traffic Secrets book was released in May, the rush died down and the offers opened up. Suddenly, you could get the box set on its own.

So if you head to the Secrets Trilogy books order page, you’ll secure the trilogy for $127 plus free shipping. 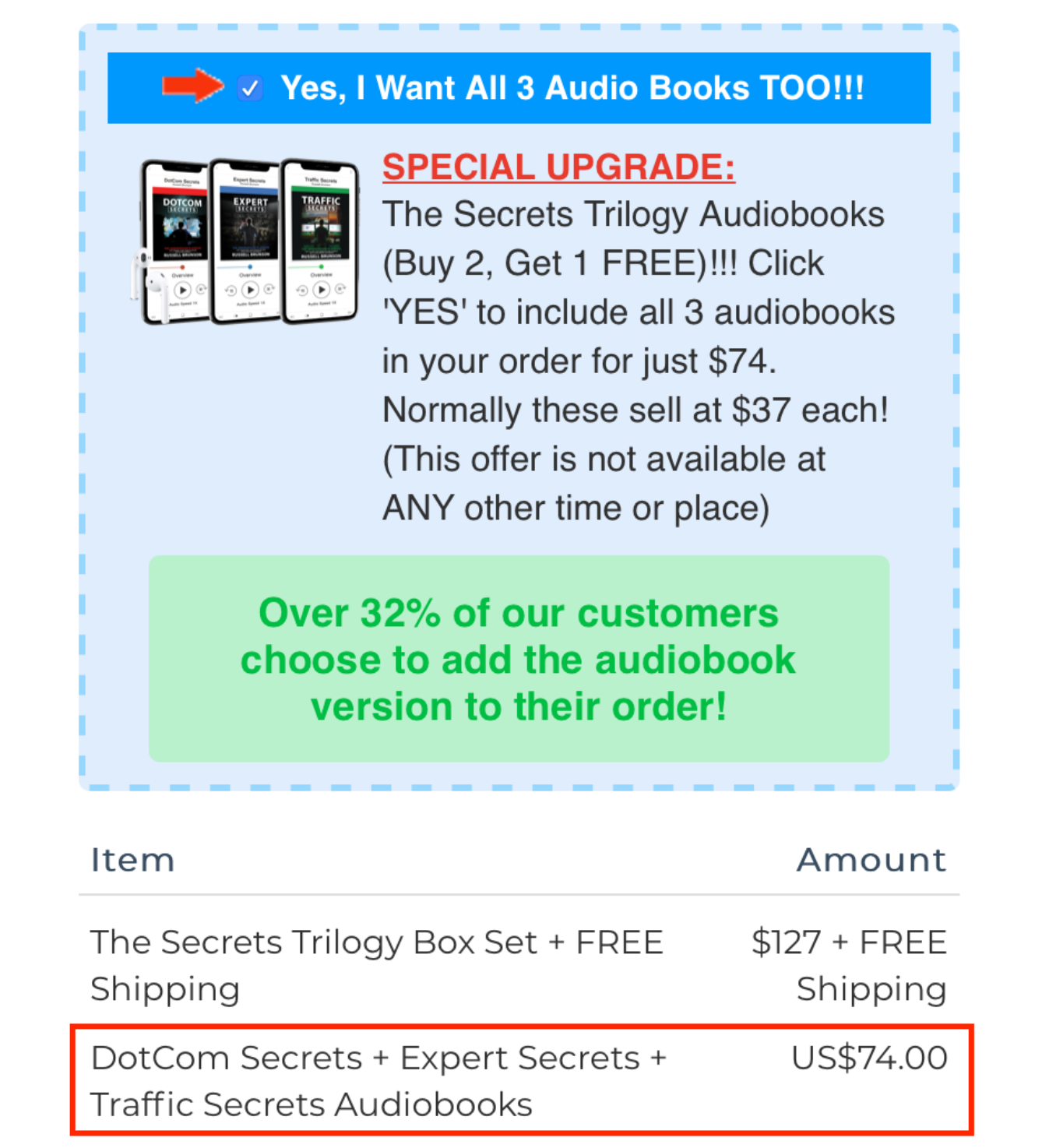 Normally, they’re $37 each, which means that you’re getting one of the Secrets Trilogy audiobooks for free.

People who aren’t big on books might think that the trilogy box set is a “nice-to-have.” However, the lineup includes DotCom Secrets, Expert Secrets, Traffic Secrets, and a fourth book, Unlock the Secrets.

The fourth book is a resource you need to pull all the prior three books together. And I personally love making notes every time I read them. I know I’ll return to these fundamentals through building multiple businesses.

Click here to get the Secrets Trilogy Box Set!